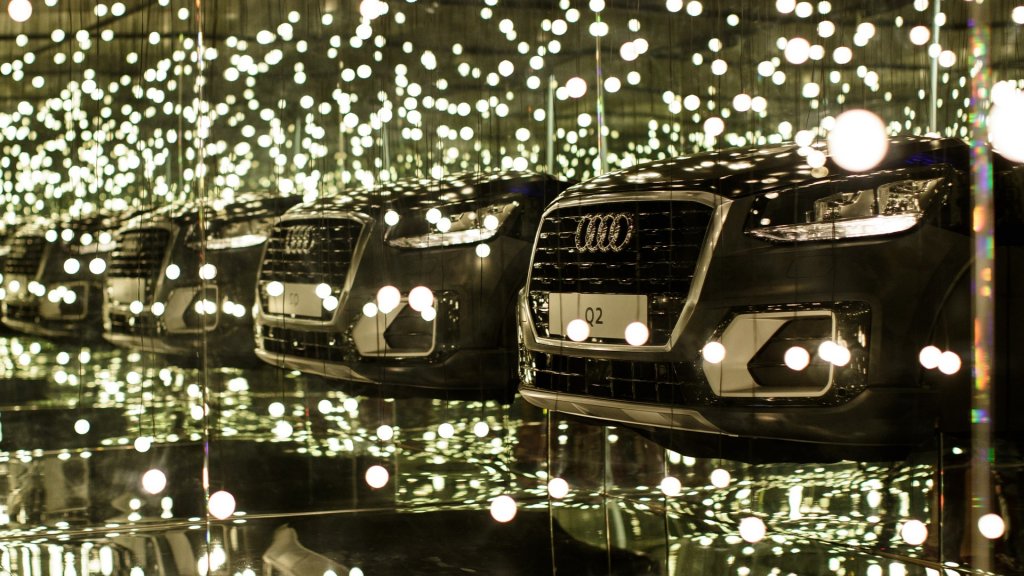 Audi Q2. #Untaggable (Launch & Event)
The story
In an era where everything fits into a box and is molded into clear stated definitions; in a world where labels prevail and stereotypes rule… How can you stand out? How can you remove all the clutter, strip all tags and put your own dent in the universe? By being #untaggable.

The idea
The first step was to grasp the public’s attention and create major buzz with a talk-of-the-town #untaggable launch event for Audi Q2. Unique audiovisual elements, futuristic outfits, hip music, and signature cocktails all together offered an unparalleled experience, celebrating the #fashion, #design and #technology traits of the new Audi model. As a second step and in order to maintain the buzz around the #untaggable Audi Q2, the talented Cypriot set designer Aliki Kirmitsi was commissioned to create an impressive installation that would offer an #untaggable experience. The installation was set inside a yellow container that was placed at a high-traffic location in Limassol, Cyprus, inviting people to enter and live the #untaggable experience. The container was divided in two rooms. The first room was a white ‘forest’ made of deconstructed hashtag (#) signs. A message on a white door encouraged guests to enter the second room, take pictures and upload them with the #AudiQ2 #UntaggableExperience. Guests would enter and get lost in space in an infinity room with the facade of Audi Q2 as the main hero.

The result
The massive media coverage and social media buzz that followed the #untaggable launch event for Audi Q2, led the way to a dynamic ATL campaign, meeting all KPIs set for the launch and boosting sales. Our second activity, managed to grab the attention of passersby, with a total of an impressive 2,154 entrants to the infinity room, within just three days. The influencers activation which visited the installation, resulted in high engagement with a total of 240,028 impressions and 5.5% engagement rate, while the total social media paid campaign (FB & Instagram) reached 89,327 people and gained 415,186 impressions.

You can find out more about which cookies we are using or switch them off in settings.

This website uses cookies so that we can provide you with the best user experience possible. Cookie information is stored in your browser and performs functions such as recognising you when you return to our website and helping our team to understand which sections of the website you find most interesting and useful.

Strictly Necessary Cookie should be enabled at all times so that we can save your preferences for cookie settings.

If you disable this cookie, we will not be able to save your preferences. This means that every time you visit this website you will need to enable or disable cookies again.

This website uses Google Analytics to collect anonymous information such as the number of visitors to the site, and the most popular pages.

Please enable Strictly Necessary Cookies first so that we can save your preferences!